Google Glass 2.0 The future is now 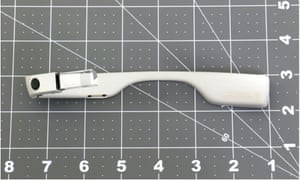 The pictures show a Google Glass unit that looks a lot like the existing Glass design. The biggest change seems to be that the device can now fold up, just like a regular pair of glasses, which will make it much easier to store when you aren’t wearing it, Ars Technica reported.

Google has filed patents with the FCC for a new version of the Glass device with photos, internal photos, test reports, test set-up photos, a user manual and information on radio frequency absorption for the device.

According to the user manual, the power button is positioned on the back of the device.

“The plastic cube just above your right eye allows you to interact with the device. The Home Screen is your starting point. By default, the display shows you the current time,” read a document describing the device.

The Glass prism looks longer than the first version of the device, which presumably offers a larger picture.

The biggest news from the manual is that there is now a camera light on the front of the device, which the manual states will turn green when the camera is on.

This might help Glass gain a little more acceptance in public as one of the things that freaked people out about Glass was that wearers could silently record people.

The FCC docs also show the unit now supports 5GHz Wi-Fi — an upgrade from the last version of Glass that came in 2013.

The charging port is different, too. There is a set of pogo pins with large circles on either side of the contacts.

The device will reportedly only be sold through the “Glass for Work” programme, and businesses will be expected to load custom software on the device.