While git has been around for some time, it is only recently that I used it for collaboration with a co-worker. For those who are not aware, git is a distributed version control system with complete history and full revision tracking capabilities. It is a great tool for developers to collaborate without losing their sanity.

In Linux, the most primitive way of using git is via the command line. Once you have installed git (with the command “sudo apt-get install git“), you can use the few commands “git add *“, “git commit“, “git pull“, “git push” to manage your repository. However, the most primitive way doesn’t mean it is the best way. Below are several graphical git client that you can use to make your git usage an easier and better one.

Git-cola is developed in Python and comes with the usual pull, push, commit functions. It also comes with a diff-viewer and file staging mode.

In Ubuntu, git-cola is found in the repository and can be installed via Ubuntu Software Center, or via the command:

gitg is a simple application. You can commit changes and view the repositories in graphical display. There is also the diff viewer and a file browser, that’s all. Some people love this as a git viewer because of the colorful graphs and great organization, making it easier to see the changes. 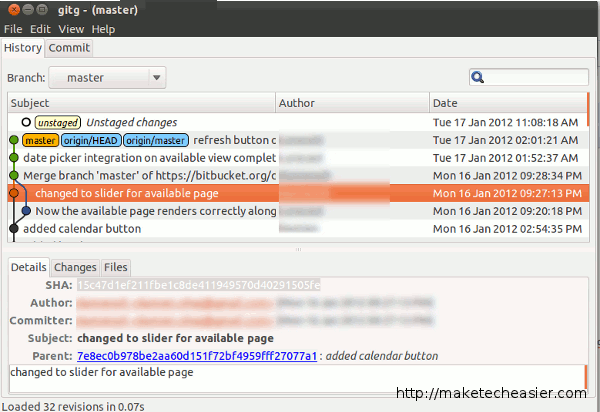 In Ubuntu, gitg can be installed with the command:

Alternatives to Skype on Linux/Ubuntu