Mercenaries come to life instead in the (typo-ridden) text descriptions, where a mercenary’s ship and corresponding ability are paired with a brief yarn. There’s the poor planetary production booster Avatar-278, for instance, a sentient harvesting unit who sells his services following a purge of AI-powered machines on his home planet. In my darkest hour, I enlisted the expensive aid of Ruire Podaq Nu and her Swayer-11 ship, a Precursor constructor vessel that alters the allegiance of non-capital planets within its range. Who says love’s the only force that can turn enemies into friends?

Overpowered? Almost certainly, and ships like Ms. Nu’s can disrupt a match so thoroughly I’m surprised there’s no way to disable the Bazaar in custom matches. But it’s a controlled chaos, at least, held in check partly by the fact that each faction has access to the same catalog of mercs, which randomly selects an assortment of 36 for each match from a total pool of 70. Though whatever I buy stays mine for the duration of the match, so there’s no worry that multiple Ms. Nus will flutter about the unfriendly nebulae.

Mercenaries are best used to make a massive leap in progress (and they thus sometimes only serve to make the powerful more powerful) or to gain a significant advantage when in a tight spot. That sometimes meant I didn’t need them at all when my strategy was unfolding well, and the AI would seem to agree, as it uses mercenaries sparingly at best. Their prohibitive costs make most mercenary ships a gamble, particularly since they don’t upgrade throughout the game and their specific natures all but broadcast your victory strategy to your opponents. At times I did fine upgrading my ships without tossing my money toward hired help; but in others, I was happy to pay the cost for the boosts to production or firepower a mercenary could bring. They’re thus a generally welcome expansion of the choices available, as they yield some hope in spots where the base game would have let you waste away into defeat. 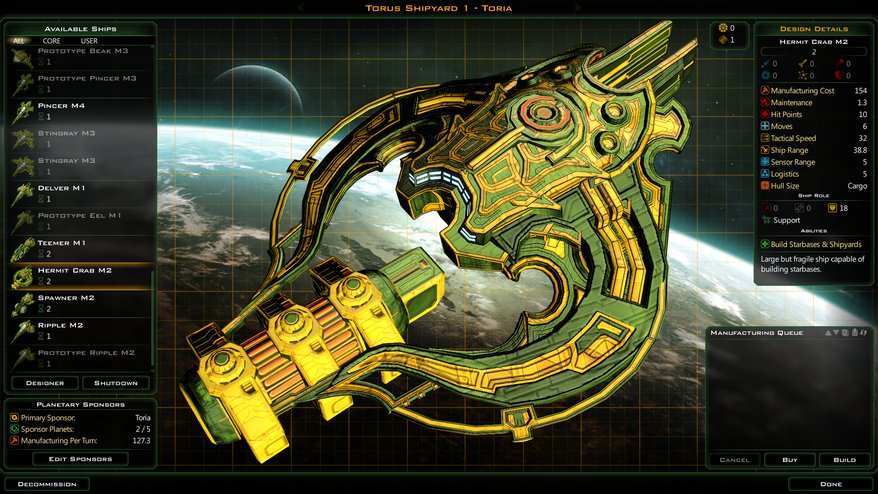 I suppose they call their capital ship ‘The Whale.’I doubt the idea that a bunch of ruffians would hire out their services for some cash requires great leaps of the imagination, but a new campaign provides a reason for the mercs’ existence should you need one. Yet “campaign” is such a strong word. It’s a bit longer than many individual chapters of the main campaign and it fleshes out the lore for the two reintroduced races from the series’ past, but it’s essentially a elaborate tutorial for the Bazaar in fancy digs.

Such as it is, the campaign follows the plight of the Torians, a race of what looks like shell-less turtles who can colonize aquatic worlds without penalty. For years they’ve been slaves to the orcs-but-not-orcs of the Drengin Empire. Since the Drengin are occupied elsewhere in the wake of the main campaign’s conclusion, they’re trying to rebuild their own empire. The Arcean Empire also makes an appearance, thus allowing a warrior race for players who don’t feel like playing evil space orcs. It’s decent stuff, but ultimately skippable for those who’d rather stick to the random maps.

As our proven mercenary hater might ask, does the end justify the means? Considering that Mercenaries costs half as much as Galactic Civilizations III itself, I suppose that depends on whether tossing away 20 bucks counts as living beyond your means. The mercenaries and two new races certainly enrich the existing 4x sandbox, but there’s not much else aside from numerous tweaks hidden under the hood.

Yet as I learned when I cashed in all my credits to enlist the services of Enopriumta Xu’s fearsome dreadnought to score a last-minute victory, sometimes it’s worth slapping down a bit of extra cash for an edge.

The Division PC review by Ktechpit