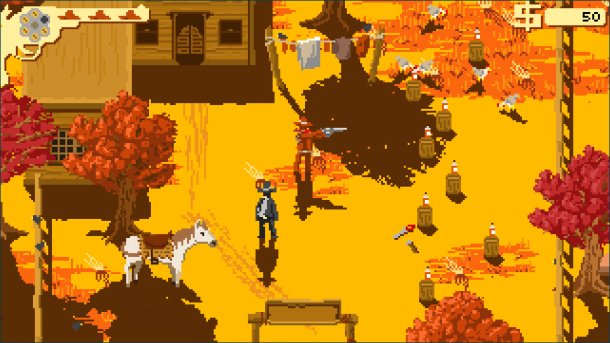 And now for something completely different, and totally ace. Westerado is a beautiful action/adventure/gratuitous western game, and stop me before I wax lyrical about the era-appropriate instrumental soundtrack. After banditos kill your family, you have to track down the responsible parties – or, instead, you could just shoot everyone in the face, foes and family alike. Westerado gets bonus points for making you unholster and cock your gun before you fire (and a million bonus points for letting you shoot the hats off bad guys). Little things, but they add a lot to the surprisingly fluid, sudden, tense combat. Between shootouts you’ll solve problems, ride your horse, and stand in the breeze admiring the astonishing soundtrack. Westerado—play it now .

Not every game has to contain spikes and grisly death, and I may have found the polar opposite of Maddening Relapse in Fishy Waters, a delightful adventure that has you plundering a lake of its piscine inhabitants in order to honour the memory of your departed father. (He was gobbled up by a whale in the opening cutscene.) You’ll roam the waters on a small fishing boat, collecting and selling fish in order to upgrade your equipment or to access new parts of the lake. It’s not quite a game you’ll give yourself over to, but Fishy Waters should make for a calming comedown after you’ve skewered yourself on a spike pit or fallen down a hole for the umpteenth time. 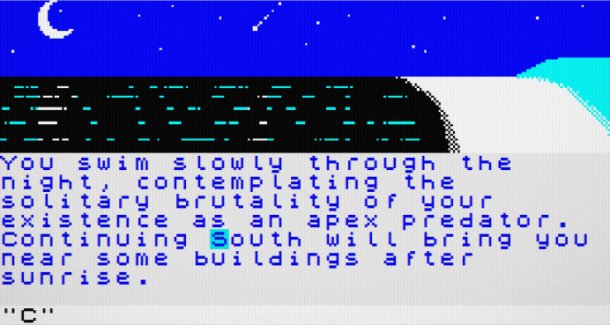 Spielberg’s seminal film classic Hook Jaws makes for a pretty good text adventure, as it turns out. He (or she, I can never remember) is a simple beast, so you don’t have to remember a ton of different parser commands while you swim around an island searching for damp fleshy humans. The main one is EAT, understandably; as in the films, Jaws is an especially hungry sort, the aim of this terrifically nostalgic adventure being to fill its vast stomach with bits of meat.

Gods Will Be Watching 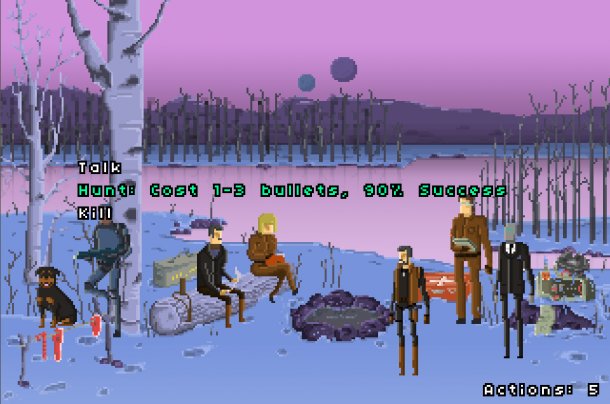 Of all the survival titles doing the rounds these days, Gods Will Be Watching seems like the least selfish of the lot. By which I mean it’s not a game about keeping one person alive but rather a whole group—which is a lot harder, and more strategic, than one guy scrabbling around in the dirt. In this beautiful one-screen adventure game, you have to survive for 40 days on an alien planet. Luckily you have a doctor, a soldier, a psychiatrist, an engineer, a robot and a dog with you—imagine if you’d been stranded with the intergalactic equivalent of Made in Chelsea. Survival is ruthless—at any moment you can choose to kill anyone at the camp. Well, there is rather a lot of meat on a human being. Er, so I’m told.